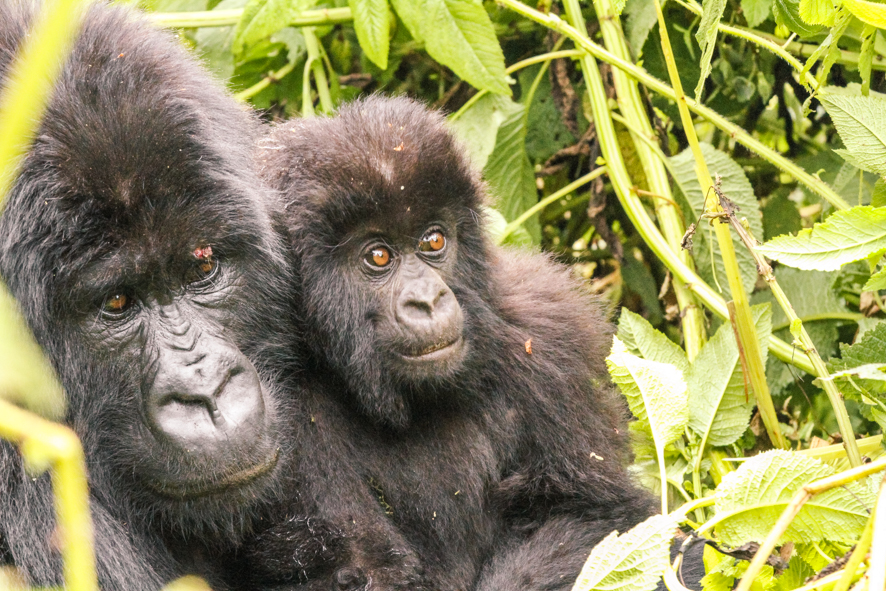 What it’s like to go gorilla trekking in Rwanda

We were lucky to be invited by the Rwanda Development Board to take part in a week of activities to support and promote sustainable conservation with a focus on the mountain gorillas.
With less than 900 mountain gorillas left in the wild, the species is critically endangered. So you can imagine how excited we were to be given an opportunity to help raise awareness.

During this week we attended the “Conversation on Conservation” conference and learned about the efforts of Tara Stoinski and her team at the “The Dian Fossey gorilla fund international”, to save those gentle giants. We also attended the 13th edition of Kwita Izina, the yearly baby naming ceremony where 19 gorillas were named. And the highlight for us was definitely our trek to meet the mountain gorillas in the wild.

What makes mountain gorillas so special?

Let’s start by saying that a study by the Wellcome Trust Sanger Institute in Cambridge confirmed that we share over 98% of our DNA with them. Only chimpanzees do better with a staggering 99%! That number really starts making sense when you look at their human-like hands and see them interact with each other.

This iconic species is one of the world’s most endangered mammal species due to poaching, disease and habitat loss. But the good news is that the efforts of the Rwandan government and other organisations are starting to pay off. Since 2010, we’ve seen a 26% increase in the mountain gorilla population. 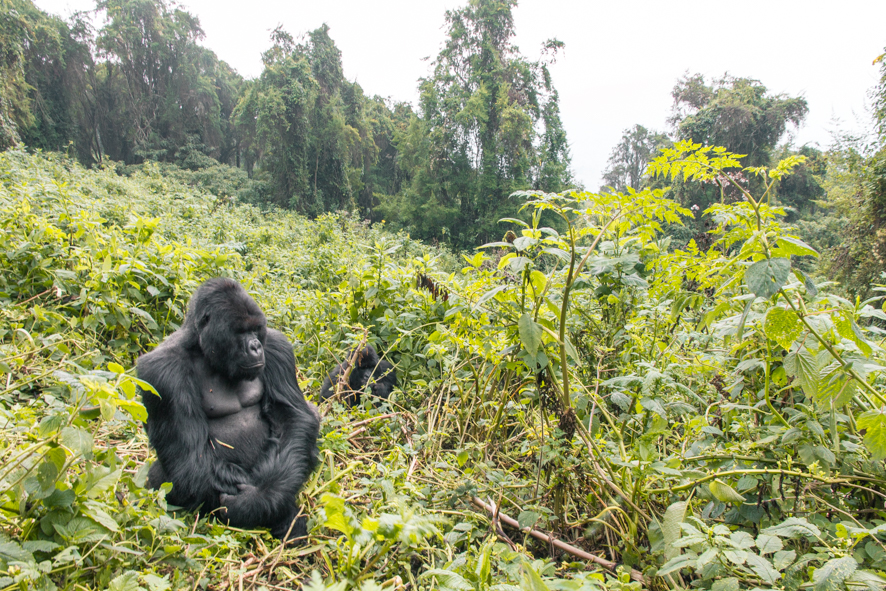 Meet the mountain gorillas of Rwanda

20 families of about 300 mountain gorillas currently live in the Volcanoes National Park located in Rwanda’s North-West corner. Out of these, only 12 can be visited once daily by small groups of 8 people max. The remaining 8 families are being studied by the Karisoke research center in order to learn more about those amazing creatures.

You can also go gorilla trekking in the Bwindi impenetrable forest in Uganda and Congo but from what we heard it’s a lot easier in Rwanda. The tracks are easier and the visibility is usually better. Let’s put it this way, in Rwanda, you’re 100% sure to see them, although, technically, nothing is guaranteed with mother nature.

The duration and difficulty of the trek to meet the gorillas vary based on several factors:

Getting ready to trek

Your day starts at 7am when you check-in at park headquarters. Local dancers, colourfully dressed, perform a traditional dance of heroes. Then it’s time to split into groups of 8 people. This is when you discover which family you will be visiting on the day. Groups are created based on numbers and physical abilities (some families are easier to get to than others). Depending on the family and the conditions, the hike can range anywhere between 1 and 5 hours. We were assigned the Susa family, and judging by the excitement of our travel companions – yes Charlotte, you in particular 😛 – it was a lucky draw. Apparently while the trek is harder, this family is easy to spot and very welcoming.

In order to reduce the impact on the gorillas, rules are pretty strict. Each mountain gorilla family only welcomes 1 group of 8 visitors for 1 hour per day. 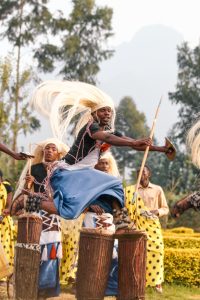 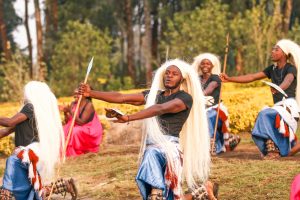 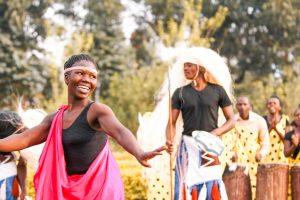 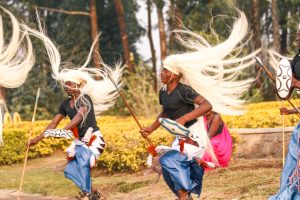 Your guide gives you some information about the trek and your gorilla family before hopping on a car to get to the track. Your starting point for the trek depends on the family you’re going to meet.
For the Susa family, the track starts in the nearby village where porters are waiting for you. Hiring one is a good idea as it helps support the community. Some of them are former poachers, and tourism offers them a sustainable alternative. They will carry your stuff and help you in case you need a hand going uphill! Iradukunda, Rafika’s porter was incredibly nice and helpful.

Note: You should not trek if you have a cold, flu or any contagious illness as transmission of human diseases is one of the main threats to wild mountain gorillas. Remember they share over 98% of our DNA.

Who is the Susa Family?

The Susa family used to be the largest family, but they split in several smaller groups a couple of years ago. It’s now composed of 3 silverbacks, 7 females, 2 black backs, 2 juveniles and a baby.

The alpha male, Kurira (the cryer) is 36 years old. His back went silver at around 12 years old. Think of it as our hair turning grey as we grow older. He decides where to go, when to stop, and when to set camp. Where he goes, the family follows. Oh, and officially, he’s the only one allowed to mate with the females of the group (“jiggy jiggy”). Well, it’s not that simple with gorillas… but what happens in the volcanoes national park stays in the volcanoes national park 😛

The black backs are about 9 to 12 years old. Think of them as teenagers. They’re the group’s troublemakers. The baby, later named Inyange, meaning handsome & smart, was soooooooo cuuuuuute! Baby gorillas are named later in the year during the annual Kwita Izina ceremony. It’s named after the ancestral baby naming ceremony that happened after the birth of a newborn in Rwanda. As each gorilla has a distinct personality, guides and trackers have time to see them interact with the group and pick a name that fits them best.

What do I need for the trek?

In terms of equipment, make sure you have sturdy shoes (potentially boots if you’re trekking after a heavy rain), long pants tucked in your socks (to avoid ant bites and nettles) and a long sleeve t-shirt.
While it’s hot when you’re walking, it’ll be a bit colder in altitude, especially when you stop to enjoy your time with the gorillas, so make sure you bring a fleece and potentially a light rain jacket.
Some people take gloves against nettles. While they can be useful for certain gorilla groups, we didn’t really need them for the Susa family.
Finally, bring lots of water! We had about 1.5L per person, but it’s recommended to carry at least 2L per person when it’s hot. And while you can’t keep food with you when you’re with the gorillas, you can definitely bring some for the trek. Remember, the walk might be long.

Tracking the mountain gorillas in Rwanda

At about 8.30 am, everyone’s set and it’s time to head off. The group walks toward the volcanoes going through farmland. In your group you’ll find your guide, your seven travel companions, porters and an armed guard for protection (mainly against buffaloes). 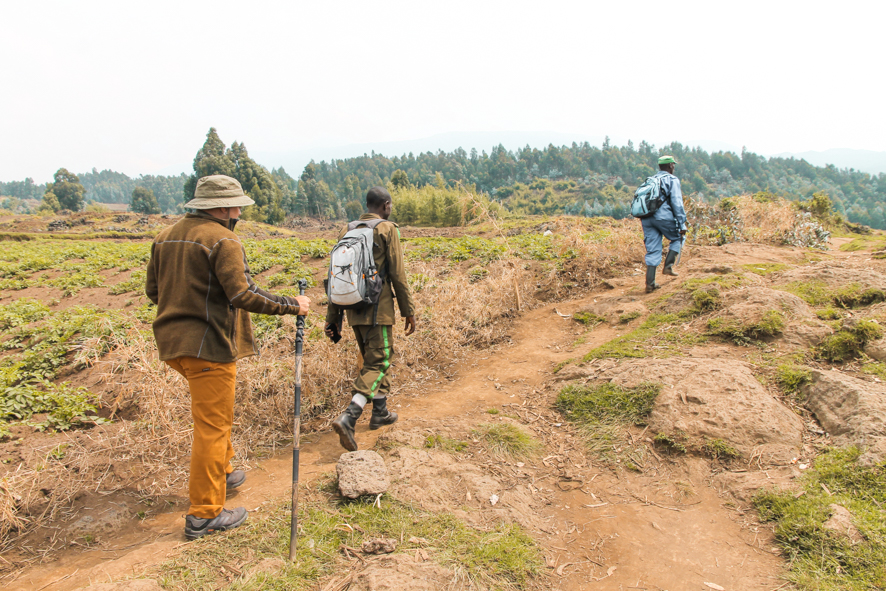 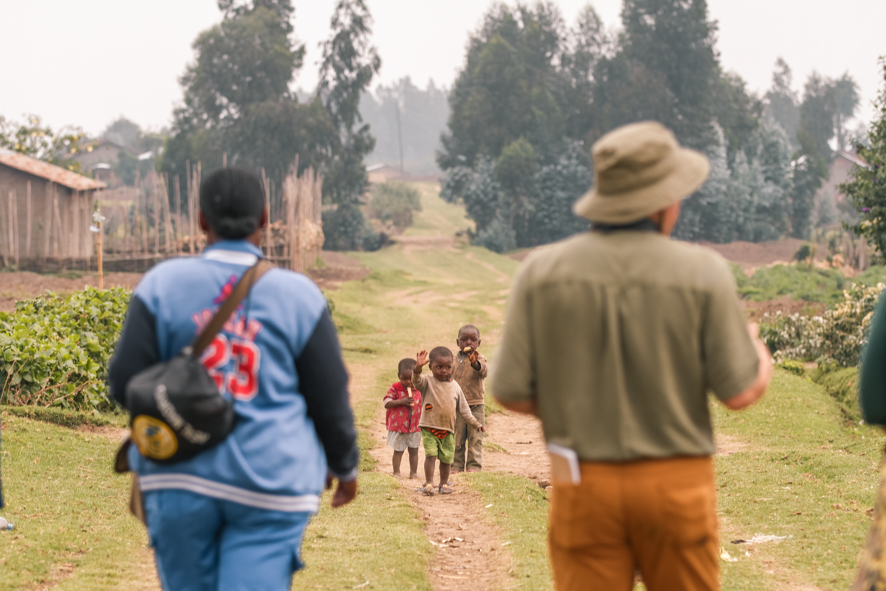 When you enter the endemic bamboo forest, your guide will brief you on your encounter with the mountain gorillas. That includes the sounds to make to communicate with them. It’s getting real and more and more exciting! It looks like this: